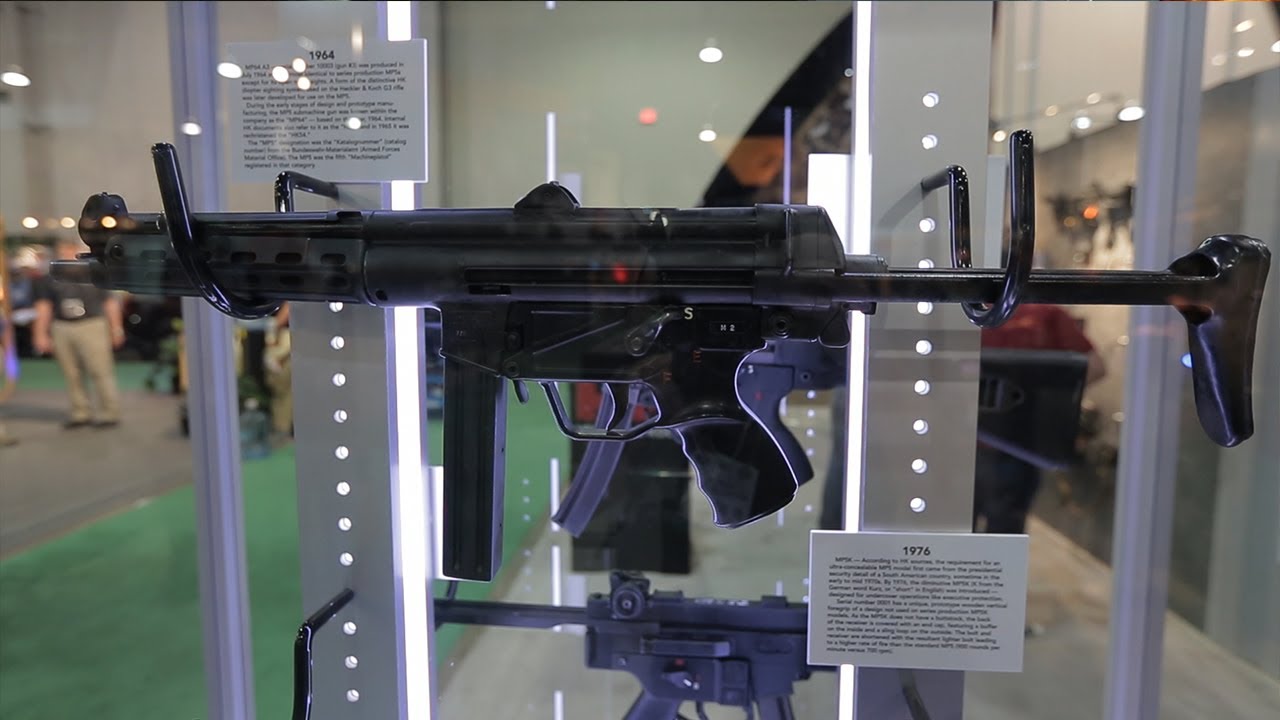 The Heckler & Koch MP5 (from German: Maschinenpistole 5, “machine pistol model 5”) is a 9mm submachine gun of German design, developed in the 1960s by a team of engineers from the German small arms manufacturer Heckler & Koch GmbH (H&K) of Oberndorf am Neckar. There are over 100 variants of the MP5, including a semi-automatic version.

The MP5 is one of the most widely used submachine guns in the world,[5] having been adopted by 40 nations and numerous military, law enforcement, intelligence, and security organizations.

Heckler & Koch, encouraged by the success of the G3 automatic rifle, developed a family of small arms consisting of four types of firearms all based on a common G3 design layout and operating principle. The first type was chambered for 7.62×51mm NATO, the second for the 7.62×39mm M43 round, the third for the intermediate 5.56×45mm NATO caliber, and the fourth type for the 9×19mm Parabellum pistol cartridge. The MP5 was created within the fourth group of firearms and was initially known as the HK54.

Work on the MP5 began in 1964 and two years later it was adopted by the German Federal Police, border guard and army special forces.

The MP5A2 has a fixed buttstock (made of a synthetic polymer), whereas the compact MP5A3 has a retractable metal stock. The stockless MP5A1 has a buttcap with a sling mount for concealed carry; the MP5K series was a further development of this idea.

The MP5A4 (fixed stock) and MP5A5 (sliding stock) models are available with four-position trigger groups. The pistol grips are straight, lacking the contoured grip and thumb groove of the MP5A1, MP5A2, and MP5A3. The selector lever stops are marked with bullet pictograms rather than letters or numbers (each symbol represents the number of bullets that will be fired when the trigger is pulled and held rearward with a full magazine inserted in the weapon) and are fully ambidextrous (the selector lever is present on each side of the trigger housing). The additional setting of the fire selector, one place before the fully automatic setting, enables a two or three-shot burst firing mode.
A U.S. Marine Corps Military Police Special Reaction Team using the MP5-N in February 2004.

A variant with the last trigger group designated the MP5-N (N—Navy) was developed in 1986 for the United States Navy. This model has a collapsible stock, a tritium-illuminated front sight post and a 225 mm (8.9 in) threaded barrel for use with a stainless steel sound suppressor made by Knight’s Armament Company together with quieter subsonic ammunition. It had ambidextrous controls, a straight pistol grip, pictogram markings, and originally had a four-position selector (Safe, Semi-Auto, 3-Round Burst, Full Auto). This was replaced with a similar three-position ambidextrous selector after an improperly-reassembled trigger group spontaneously fired during an exercise. The “Navy”-style ambidextrous trigger group later became standard, replacing the classic “SEF”.