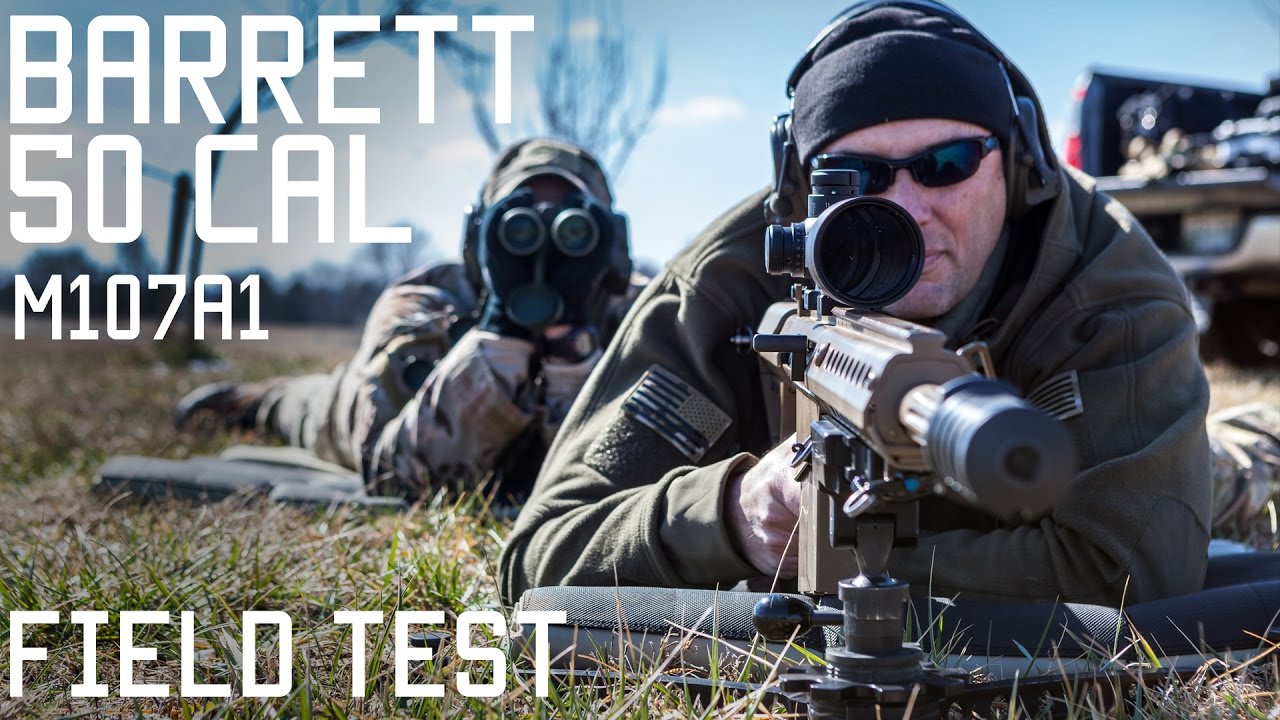 Here’s another video on one of my personal favorites… the Barrett M-107 .50cal Sniper Rifle. Now, this isn’t the old M-107 that I used back in the box, before I retired. This is the new M-107A1. Lighter, stronger, and just plain better.
This puppy is 5 pounds lighter. They managed much of that by cutting the barrel length down. I normally wouldn’t go for shortening the barrel on a long-gun, but the M-107A1 still has the knock-down punch, accuracy, and range that the old M-82 had. How? Magic? Nope. Let’s just say that the engineers at Barrett have really mastered this cartridge and weapon design.
Now, the Tripod… Why a tripod? Well, first ask what is a tripod for. The military has used tripods for decades to improve accuracy and control of their medium and heavy machine guns. Accuracy: a tripod handles recoil better than just the bipod. Control: a tripod was designed to have limiting factors of traverse and elevation that would allow commanders (or gunners) to lock weapons to fire with restrictions. These restrictions would include setting it to “final protective fire”,” where a gunner could swing the gun to the limit (set during the day) and lay down a wall of lead that would mow enemy down that tried to cross that marked line. In addition, in support of raids, the tripod (using a T&E) could limit gunners from swinging the guns into friendly troops. On occasions, like infantry basic training, the tripods would also limit depression of the machine guns, allowing us grunts to low-crawl under the wall of lead. These tripods were heavy and bulky; which led to their seldom use by modern SOF forces, who are already carrying too much weight. That said, the need for a tripod still exists. So, the call went out to MSG, to solve the problem. This is the company that cracked the code on making us all the sexy HUMMER parts, brackets, and mounts that every SOF unit needed, but couldn’t agree on. They built the machine gun swing-arms that we were rocking on our HUMMERs in Iraq and now, today, the latest generations of their mounts are even better.
When I was first shown the MSG Tripod, I wasn’t impressed; mainly because I hate tripods, having humped an M-60 machinegun back a hundred years ago (dating myself again). However, once I got the specifics and got my hands on it, this puppy is awesome! It weighs nothing. You can get lower than you can with just the bipod (which puts my head lower in a gun fight, behind cover). It works with not just the Barrett, but also the M-249SAW and the M-240 Medium Machinegun. I like that you can do micro-adjustments to elevation with the large wheel at the base. Once released from the gun, it folds very small. This is great for parachuting, but also for just general humping around on the battlefield. I still remember having to hump the Tripod for the M-60 through the swamps in Ranger School; what a boat anchor. Once you lock your weapon in the MSG Tripod, whether a M-240 or Barrett, it is a much more stable than just using the organic bipod, so accuracy will improve.

How to get the Nimbus gun in BONELAB

Water gun. This would be so fun.