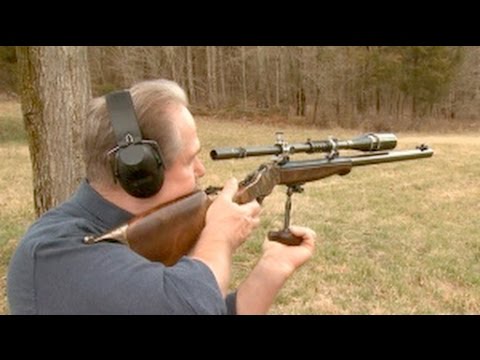 It is a firearm with an unusual name, and an unusual appearance to go with it. It’s the rifle known as the Schützen. It came to America with German immigrants more than a century and a half ago, and it is the product of a gunmaker’s art, with beautiful stocks, handsome carving, and meticulous engraving. Furthermore, the Schützen is both a rifle and a style of competition steeped in European shooting tradition. It has been that way for more than 200 years, and a Schützen Competition is quite a challenge, both mentally and physically.

“The original Schützen rifles were all muzzle-loaders. That’s what the German immigrants brought with them and built over here,” says, John Merz, a Scheutzen enthusiast, avid competitor and editor of Single Shot Rifle Journal, a magazine devoted to the Schützen game and history. “I’m drawn by the history. I’m drawn by the tradition of it. It’s one of the few sports, I know, where you can accurately measure yourself against what a shooter did 100 years ago.”

There is no other firearm that looks or shoots quite like a Schützen. There are elongated prongs on the rifle’s butt plate, which work hand in hand with the unique palm rest to help competitors balance the rifle. Schützens are heavy too, weighing as much as 15 pounds, much of that in the barrel. Its dramatic cheek piece is a significant aid to offhand shooting, but it makes shooting in the prone position much more difficult!

Tune in to Outdoor Channel for more.

ABOUT SHOOTING USA:
Jim Scoutten, America’s Most Watched Firearms Reporter, has been on the beat for 25 years, reporting the stories of the Shooting Sports and the firearms Industry. The show produces a series of popular segments focusing on historical guns, the personalities in the sport and industry, insider reports from gun tests, and practical tips from shooting sports pros. The show appeals to shooting sports enthusiasts of all ages and skill levels by providing practical tips on safely handling, modifying and repairing their favorite guns.