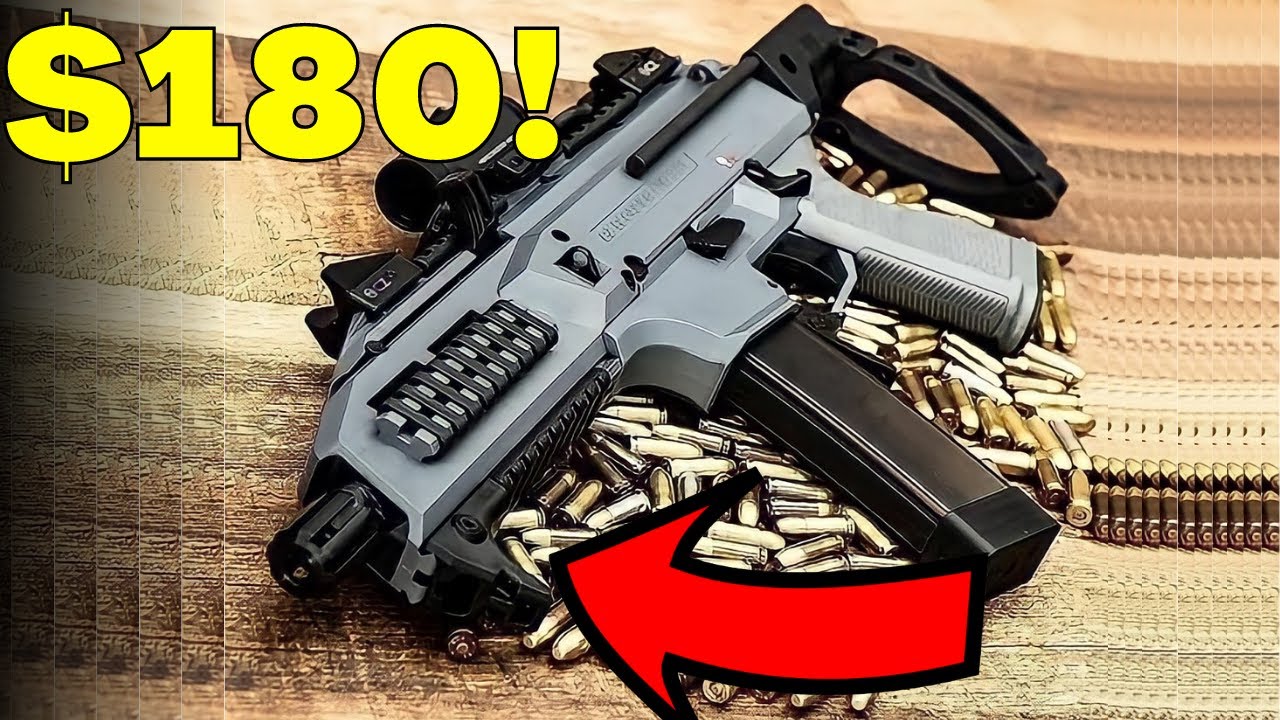 Number 6. RUGER PC CARBINE M-LOK ($450)
If you’ve seen much of anything we’ve posted about the firearms industry, or just seen me personally at the range, it’s no secret that we’re big fans of Ruger and most of their firearms. Of the big name manufacturers in the US, we think they provide some of the best value per dollar spent. And the Ruger PC Carbine helps us make our case nicely.
At around $450, the Ruger PC carbine fits nicely in with a lot of the other PCCs on today’s list, pricewise. This takedown carbine accepts both GLOCK mags and common Ruger pistol magazines (specifically SR series and American Pistol series), and includes the magwell adapter for GLOCK mags and the SR series mags, with the American series magwell available separately. The new M-LOK version seems aimed at PCC competition and is our personal favorite. It comes with a free-floated M-LOK handguard that is milled out of anodized aluminum which keeps the carbine light and maneuverable, making it perfect for the fast action of competition. Overall, if you’re looking for a fairly affordable 9mm carbine, and you want something that takes GLOCK mags, this is an excellent choice. You’ll also have no problem finding magazines.

Number 5. PALMETTO STATE ARMORY AK-V ($1,000)
In recent years, Palmetto State Armory has been making some seriously interesting AK pattern rifles, and now they’ve decided to enter the pistol market as well. The PSA AK-V is effectively an AK style pistol, complete with a brace, that gives you AK ergonomics with 9mm ballistics. This is one not to miss. We’d like to make use of this gun in a home defense kind of configuration, running it pretty light in terms of accessories to make the best possible use of the small platform, as well as the fact that it looks cool just as it comes from the PSA factory.

Number 4. CZ SCORPION EVO ($849)
The CZ Scorpion EVO is another hugely popular PCC on the competition circuit, and it’s also gaining ground in the home defense and law enforcement markets as well. This lightweight carbine clocks in at under 7lbs even chessbase keygen with the 16″ barrel and folding stock, and the gun points about as well as you could ask. Like most 9mm pistol-caliber carbines recoil is minimal, and the included muzzle brake lightens it even more.
The Scorpion EVO comes in many different configurations as well, including pistol formats, so whether you’re looking for a truck gun, something to keep by the nightstand, or a full-sized competition gun, you’ve got options. It’s also imminently reliable with factory ammo, and we haven’t heard of a malfunction in over 2000 rounds now…even if you’re yet to clean it, guilty as charged, haha!

Number 3. SIG MPX COMPETITION ($1,700)
If we did have to choose, the SIG MPX Competition would be the frontrunner for our favorite PCC…but only barely. It’s narrow lead has more to do with how good the other PCCs on this list are than any failing of the MPX though. This carbine has literally changed the tactical world when it comes to SMGs, and many agencies and organizations that used the MP5 are making the transition to the AR-style MPX. The MPX design has more than proven itself in the hands of military and LEO shooters at this point and has shown itself to be imminently reliable. And ours has never had a hiccup, at all, ever. It’s also one of our favorite guns to train new shooters on or to just let people shoot at the range.

About Best Guns
🎥 We will create all kind of videos regarding Glocks, Berettas and more other Guns!
🔫 This channel wil inform you about all Firearms. We will talk about the Best Handguns, Budget Guns and Assault Rifles.
🚨 Also the following pistols will be in the videos: 9MM, AK47, Glock 19, Glock 17, Ruger, Pistol, Magazine, 45, 9MM Parabellum Bullet, Sig Sauer, 40 Cal, Colt, Rifle, Sig Sauer P320 and Sig.

TOP 5 MOST ACCURATE 9MM PISTOLS IN THE WORLD