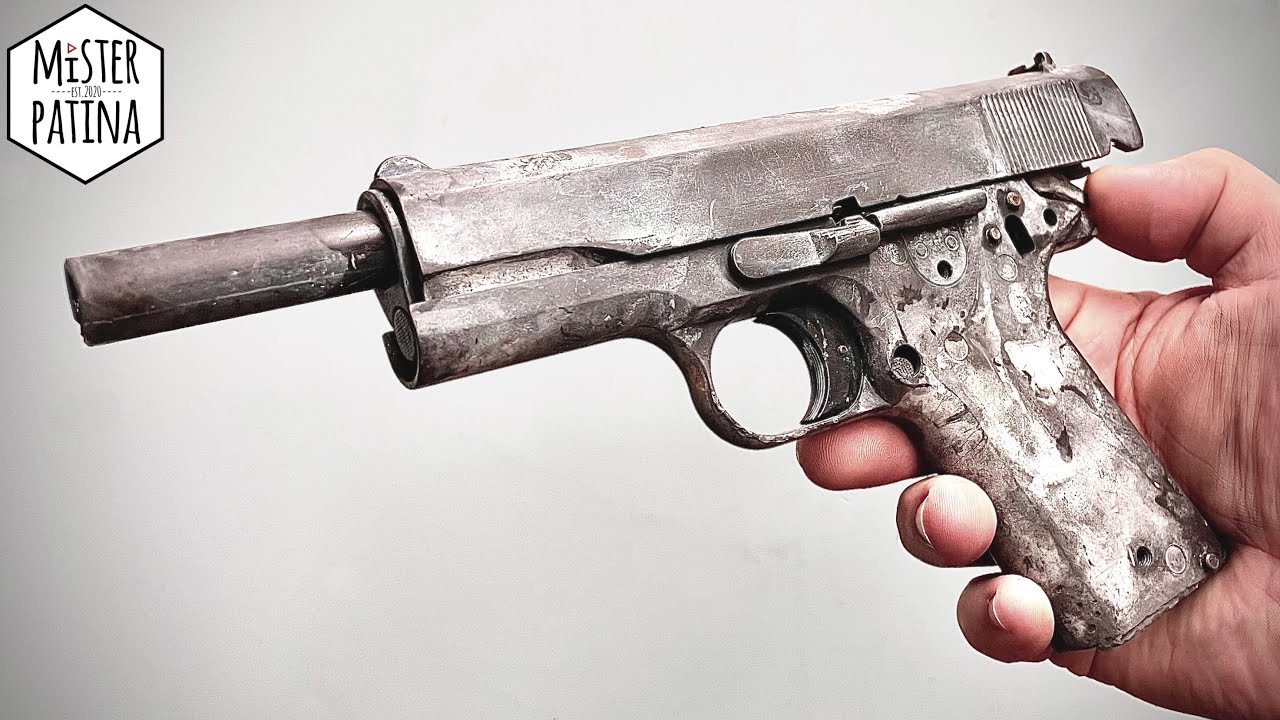 First things first: iam not a fan of real guns, but restoring a blank gun was a really interesting project for me.

I got this gun from a friend, it was laying in his barn for several years. He told me that its an Colt blank gun, made in germany.

I started the restoration of this gun by making it work again with WD40. The gun slide was stuck. After getting all mechanical parts moving again, I was able to disassemble the gun. All of the parts were looking good, but pitting did its job on this zinc die-cast gun.
After sandblasting the slide, i did some sanding work on it. Reblasting with glassbeads was the perfection preparation for the cold bluing bath. I used the Tifoo cold bluing bath, since its made for zinc.
The cold bluing turned out great, so i moved on with the other zinc parts. All of the small steel parts were cleaned in a ultra sonic cleaner with citric acid cleaner. This was pretty effective.
Before disassembling, i reengraved the lettering on the gun slide with my 5mW laser. This turned out pretty nice. The final test shows, that this gun is working perfectly fine again. The final test was done on my private property.

Brand/Model: Its a zinc die-cast Colt Government 1911 A1 9mm PAK (yup, the real 1911 has a different caliber..!), made in germany. Its a blank pistol (Schreckschuss-, Gaswaffe).

Logos: I didnt use the original font while engraving. I didnt engrave the ‘Colt’ Logo, because Iam not allowed to recreate the Logo.
The ‘PTB’ sign is the ‘Beschusszeichen’, a sign which says that this gun is allowed in germany.

I hope you have fun with the video! If you have any questions on the used tools, materials or the processes, write it in the comment section – i´ll try to answer as soon as possible!

We Put Guns and Swords in Chess and Everything Went Wrong in FPS Chess!

Full Comer Interview: 'We Already Have Many Gun Laws On The Books'

States With The Most #Gun Deaths