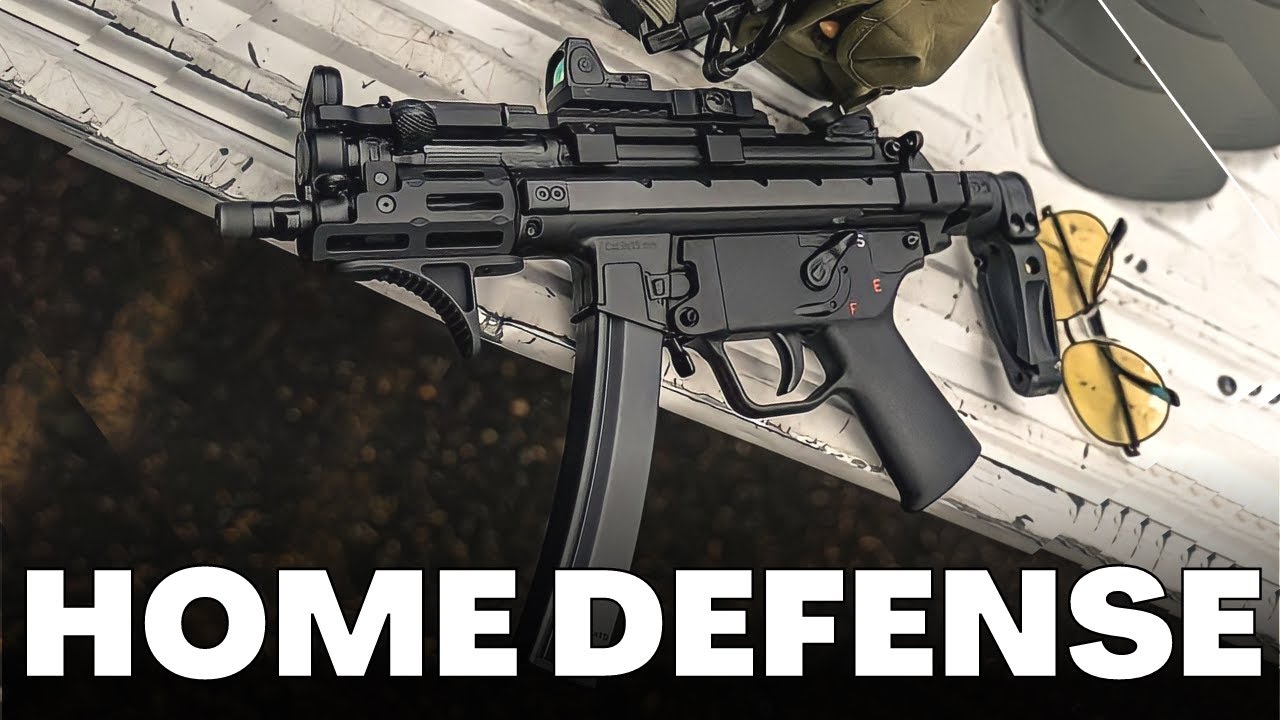 Number 10. PSA AK-V ($1,000)
Until a few years ago, there weren’t many options in the way of a pistol caliber AK platform. There were a few Frankenstein builds out there, and the Definitive Arms AKX-9, which will be discussed later, was the first actual blueprinted pistol caliber AK, but it was expensive and hard to get your hands on. Thankfully PSA stepped up to the plate and created a gun we have quite a bit of experience with, called the AK-V chambered in 9mm. What a blast to shoot!
We’re huge fans of the 9mm round and the AK variant. When the two are combined it’s a match made in heaven. To top it all off, the AK-V has some great upgrades not found on most other AK-47 type rifles, like a last round bolt hold open, and Magpul furniture. They’re available in both pistol and rifle forms.

Number 9. Definitive Arms AKX-9 ($1,600)
This is a gun we own in our personal collection, and it’s one of our favorites. It’s accurate, affordable to shoot, is based on an AK-47 platform, accepts Colt Stick Mags, and has never failed us once.
This is a PCC that you won’t find on most other lists, because they are super hard to find, but a no-brainer once you see how they run. This might be our own personal choice for best pistol caliber carbine. They come into stock randomly on different websites as well as the used market.

Number 8. Henry Big Boy Carbine ($1,000)
Say what? Henry? Well, have you ever shot a Henry Lever Action rifle before? If you have, then you get it. If not, then you should. Did you know they make a carbine version with a 16.5 inch barrel? Every gun Henry makes that we’ve shot was reliable and accurate (almost to a fault, but not quite). They make Big Boy Carbines chambered in .38/.357, .327, .41, 44, and .45 Colt.
This is an excellent addition to those of you who are revolver owners so you don’t have to actively stock a new caliber. The primary downside to this is the weight. The brass is just heavy, and there isn’t much of a way around it.

Number 7. PSA PA-9 ($500)
We’ve got quite a few rounds downrange with a PSA AR-9, and we’re impressed. Not only is the quality there, but the value is also there.
As an added bonus, the controls are familiar to anyone who has had experience with an AR-15 variant rifle. If you’re serious about self-defense having an AR-15 chambered in 9mm is an excellent option for training that can also be used for defense.

Number 6. Kel Tec Sub 2000 ($500)
The Kel Tec Sub 2000 is, to us, the ultimate backpack gun. It folds up nice and small, shoots 9mm like a champ, is accurate-enough, and pretty reliable.
These aren’t the easiest guns to find on ton today’s best pistol caliber carbine list though, but well worth the search for a gun you can stick in a backpack or a safe in your truck. They can be had in 9mm or .40 S&W, and retail for about $500, again, if you can find one.

Number 5. CMMG Guard 45 ($700)
This is one of the few on this list not chambered in 9X19, though if memory serves us, they do offer a 9mm one, as well. We were actually at the event they released the Guard at, and was highly impressed.
To us, this platform makes sense for home defense. Why? Well, you still get a maneuverable platform, but with .45 ACP, you don’t need to worry about penetrating through walls as much as you do with some of the other calibers. Of course, it is still a concern to a degree, just not as much.

Number 4. SIG Sauer MPX ($2,000)
The SIG MPX is easily the most expensive pistol caliber carbine on today’s list. Coming in at about $2,000, this is a carbine you have to be able to afford. But, SIG charges that much money because they can get that much money for their guns. Period. Either way, the MPX is a great PCC.
The SIG Sauer MPX was designed to be a replacement for the Heckler & Koch MP5. The HK MP5 had ruled the sub-gun world for years and SIG decided they wanted to upset that system. To do so, they had to design a gun that was more controllable, cheaper, and just overall better than the MP5. In some regards, we think they did a pretty good job. The SIG MPX feels just like an AR-15, so all its controls and features translate extremely well. If you’re used to the AR-15 platform, it’s a great-looking gun. If you’re into tactical-style firearms, or you love movie guns, you’re going to love the SIG MPX, which has been featured in a lot of awesome movies.

About Best Guns
🎥 We will create all kind of videos regarding Glocks, Berettas and more other Guns!
🔫 This channel wil inform you about all Firearms. We will talk about the Best Handguns, Budget Guns and Assault Rifles.
🚨 Also the following pistols will be in the videos: 9MM, AK47, Glock 19, Glock 17, Ruger, Pistol, Magazine, 45, 9MM Parabellum Bullet, Sig Sauer, 40 Cal, Colt, Rifle, Sig Sauer P320 and Sig.

HOW TO USE A TACTICAL WHIP #selfdefense #tacticalwhip #tactical #gear

How not to modify a gun in Escape From Tarkov